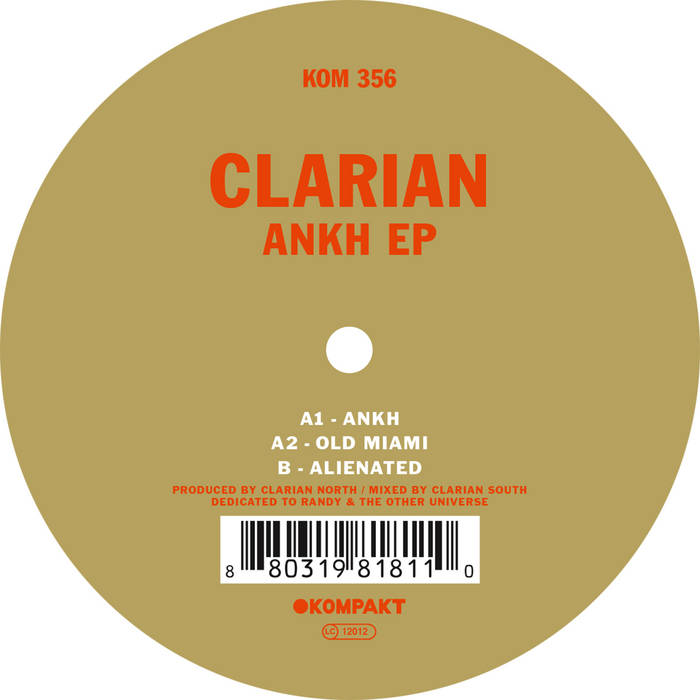 Returning to Kompakt after his quirky label debut “Mission To Bars” (Kompakt 347), transcendental house music producer CLARIAN resumes his search for mesmerizing soundscapes with a surreal hue on the ANKH EP. Three new tracks continue the spaceman chronicles, with the last EP’s protagonist embarking on a grander adventure than ever before – our unfortunate hero, who initially got stuck in a bar on a strange planet, now intends to travel to the outer rim of the known cosmos in a desperate bid to stop the ancient evil army of the space zombie lizard kings. At least that’s what he’s trying to do – unprecedented turmoil brought him to a moon rave in the Hipston Galaxy, “the dopest galaxy with the freshest Eco-galactic-friendly products and politically correct views on Space Blobs”. And it’s here that the spaceman spends the next three years in an awesome blur of party photons and anti-gravitational break beats... until that fateful moment during an after party in an illegal crater with Ricardo Villaroboto, when he’s doing bumps of Kryptonite with a Zorgonian in a bathroom stall and hears about the space zombie lizard kings for the first time. Their formidable stupidity and greed for brains has the potential to destroy the very fabric of space and time, a very troubling thing for people who care about existence and stuff. Only one mysterious object is powerful enough to take down the zombie lizard empire and restore balance to the universe: it’s called ANKH and emits its dreamy harmonics, glistening synth motives and gentle beat throbs from deep within a crystallized pyramid. Just as the spaceman is about to respond – probably with a heroic vow to the good cause -, the 17-tentacled DJ drops the slightly nostalgic OLD MIAMI, a groovy, hypnotic late-night jam for the raving flâneur (also a reference to a dive bar in Detroit where CLARIAN played one of his first shows) and our hero euphorically sneezes so hard that he accidentally sprays the Kryptonite all over the floor – while smacking his space helmet against the wall behind him. Several million moon cycles later, he wakes up with a pounding headache, freely floating in space. Completely alone and with out a single glass of whiskey to take the edge off, he starts feebly humming to himself – a song called ALIENATED that perfectly showcases CLARIAN’s well-documented knack for catchy weirdness, letting its main motive glitch in all the right places. Following releases on imprints such as Multi Culti, Soft Touch, Rumors or Turbo, plus a stint as mixer, arranger and audio engineer on Tiga’s last album “No Fantasy Required”, this latest offering reveals an artist that has built himself a strong pedigree with fans of immersive, melodic dance music – but still manages to surprise with ambidextrous sound design and that refreshing tang of absurdity that seems to be his specialty. What about the spaceman, though? Is this the end of him? Will he ever be able to sip his beloved whiskey? Will the space zombie lizard kings prevail? Find out more in this next chapter of the spaceman chronicles!