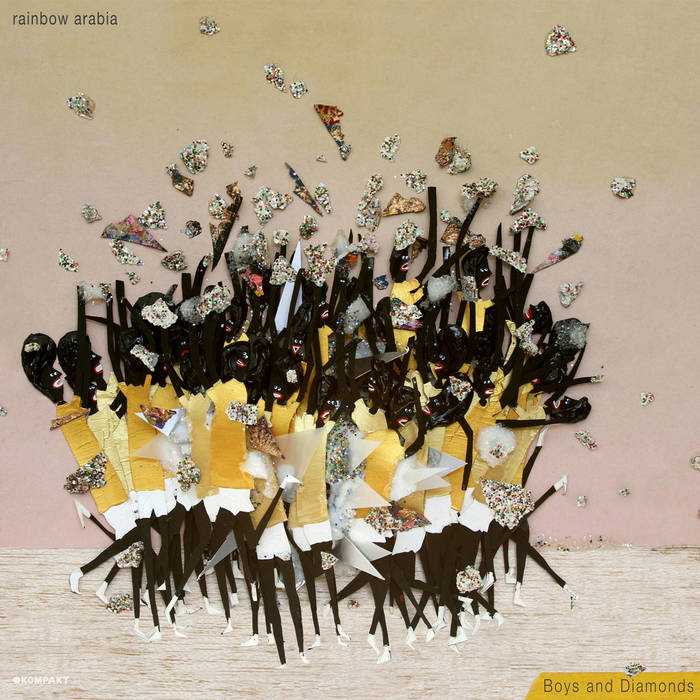 Averse to any easy classification, Rainbow Arabia's continent-trekking, kaleidoscope pop is rooted in no particular time or place, employing modern technological processes to an array of musical cultures and eras. The Los Angeles duo began with the purchase of a Lebanese Casio that played microtonal scales and Eastern beats, with which they quickly recorded their propulsive first EP, The Basta, synthesizing bossa nova and industrial post-punk with heavy Middle Eastern vibes. Digging deeper for inspiration from the worldly found sounds of Sublime Frequencies compilations, their follow-up EP, Kabukimono, expanded the color palette of their "fourth world" pop with dark, Arabic disco-dancehall jams sitting alongside sunnier moments with Caribbean and African flourishes. Rather than restricting themselves to the expanse and musical artifacts of Earth alone, Danny and Tiffany Preston recalibrate their focus aiming their sights upwards into outer space. Nearly a year in the making, Rainbow Arabia's forthcoming first full-length Boys And Diamonds is a stunning journey that not only marries East with West but also the past with the future. Immediately, you can hear some familiar elements found in their previous releases: Danny's asymmetrical tribal beats and lysergic pads, Tiffany's labyrinthine fretwork and tick-tock vocal swagger. But you'll also notice: the hooks are stickier and more confident, the rhythms are sturdier, and the production is lusher, even astral, giving the songs more space to breathe. Boys And Diamonds (out March 1st in the US, February 28th in UK/Europe) is unmistakably a pop album but also one that comfortably fits in with Kompakt's long-standing lineage of genre-refracting releases. You will be hard up find another record that cohesively brings to mind Siouxsie rubbing elbows with Shabba Ranks, Giorgio Moroder sipping daiquiris in Bali, Desmond Dekker envisioned through skittering footwork, Tom Tom Club sitting in with Congotronics, even early Madonna produced by Chris and Cosey. Unlikely as all of that sounds, Rainbow Arabia makes it sound easy. Mostly recorded at their home studio in Echo Park, Muppet Palace, Boys And Diamonds was written and produced by the couple with help from their friends in Los Angeles and beyond. Drummer/producer extraordinaire Butchy Fuego (Pit Er Pat, Boredoms, MIA) contributes arrangements and beats in places, and Icy Demons' Dylan Ryan plays on the percussion-heavy island shuffle "Nothin Gonna Be Undone". The album was mixed at the wonderful Hobby Shop studios in LA by Mudrock, who also adds some final production touches on the record. The 11 new songs on the album, were also made possible by the encouragement of peers/heroes in LA like Former Ghosts, Fool's Gold, Secret Circuit, Abe Vigoda, and Part Time Punks dj crew. Outside of their hometown, they also found support and inspiration from kindred spirits like Pictureplane, Spoek Mathambo, as well as their new home, the ever-illustrious Kompakt...