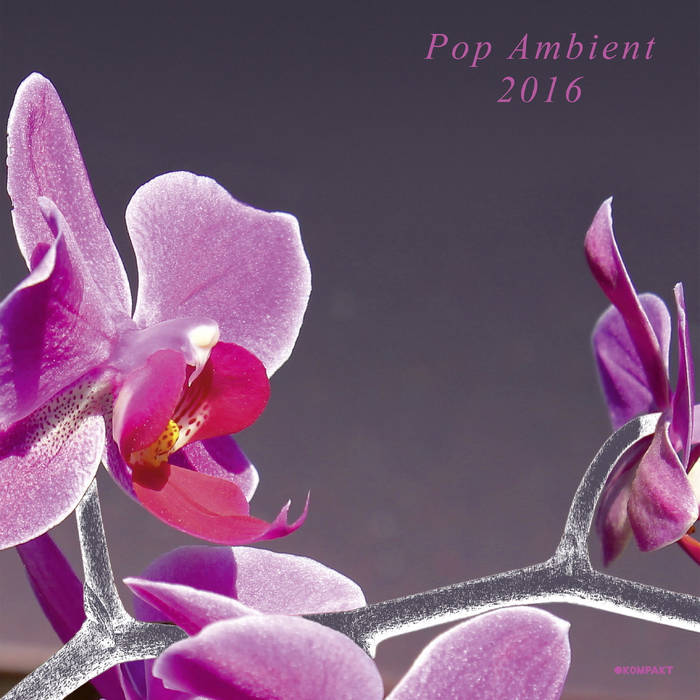 It is certainly not a small feat to have an ambient compilation series running for over a decade and keep it fresh and interesting - especially when the core aesthetic idea is as well-defined as POP AMBIENT's. However, this didn't keep last year's instalment (KOMPAKT 315 CD 120) from finding a compelling balance between veteran contributors like JENS-UWE BEYER or LEANDRO FRESCO and new, idiosyncratic voices like MAX WÜRDEN or THORE PFEIFFER. They all return for POP AMBIENT 2016, joining a captivating cast that also includes heavy-weight soundsmiths, experimental composers and ambient confidants like THE ORB, ANTON KUBIKOV of SCSI-9 fame, MIKKEL METAL, GREGOR SCHWELLENBACH or STEPHAN MATHIEU.

Starting off with a surprise guest, POP AMBIENT 2016 presents electroacoustic composer and installation artist STEPHAN MATHIEU, whose highly textured opening drone APRIL IM OKTOBER bears all the hallmarks of a pop ambient classic, stealthily weaving in layers of sound and moving fluidly between territories. The man clearly knows what he's doing - after all, he has worked with luminaries like Taylor Dupree, Ekkehard Ehlers, Janek Schaefer or Sylvain Chauveau (see also Pop Ambient 2009). Meanwhile, THE ORB show off the full extent of their experience in the field and have their own little ambient collage opera going on in ALPINE DAWN - a slight detour from their beat-laden full- length MOONBUILDING 2703 AD (KOMPAKT 330 CD 124), but just on that same level of masterful sonic dexterity.

Moving forward, SCSI-9's ANTON KUBIKOV builds momentum with a sweet melody slowly evolving to the atmospheric backdrop of a light synth rain, while MAX WÜRDEN imagines a dreamy, yet twisted underwater world with lots of space to get lost in. He later returns for a collaboration with THORE PFEIFFER (not on vinyl), the other newcomer hero from Pop Ambient 2015, and the result is a fascinating amalgamation of both producer's distinct sonic sensibilities - the grittier, drone-based approach from Würden and Pfeiffer's penchant for roaming samples and skewed loops. Another dedicated collab comes from SICKER MAN & GREGOR SCHWELLENBACH who team up for string- infused, cinematic epic TURNS.

Longstanding Kompakt ally MIKKEL METAL presents the surging TITAN, followed by LEANDRO FRESCO's magistral rework of DAVE DK's VEIRA from his VAL MAIRA album (KOMPAKT 326 CD 121). A very special bonus adventure can be found in THORE PFEIFFER's "megamix" of WOLFGANG VOIGT's RÜCKVERZAUBERUNG (not on vinyl) - an entire concept series succesfully reimagined as one sweeping cut. JENS-UWE BEYER continues his expeditions into hypnotic, semi- acoustic soundscapes on THE BREMEN, transitioning into the windy mountaintops of LEANDRO FRESCO's mysterious, multi-layered CONFIGURACION DE ATAQUE (not on vinyl). THORE PFEIFFER has the honour to conclude POP AMBIENT 2016 with the appropriately titled IDYLL, a soothing, swirling synth study giving the listener ample opportunity to return to mundane reality at his own pace.